If vamping out is your thing, vampire contact lenses should be on your list for the ultimate costume. Okay, vampires are like standard Halloween fare–everybody’s dressed as a vampire at least once in their life. So what can you do for something different?

Here’s what fantasy writer Sandra Wickham did to promote her book launch:

My first short story publication was in a Vampire anthology and for the launch of the anthology I wanted to dress up as a vampire. Since it was a literary event, I didn’t want to go too over the top scary, so I decided on the Angelic blue contacts. I’d never worn contacts in my life and I was a bit scared of trying them, but they were easy to put in and take out.

I also wanted smaller fangs, so I would be able to speak to people at the book launch and signing. I chose the small deluxe Scarecrow fangs, with the blood tips to make them stand out a bit more. They were so easy to fit, sat naturally on my teeth and they didn’t affect my speech at all.

Oh,  and talking about fangs, Sandra wears the small Scarecrow fangs. They’re not that expensive and easy to put in. Check em out here!

For fans of vampire fiction

Sandra has stories in both Evolve and Evolve 2. Catch her at her website and blog here! 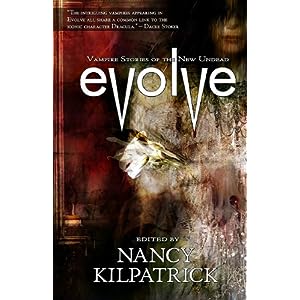